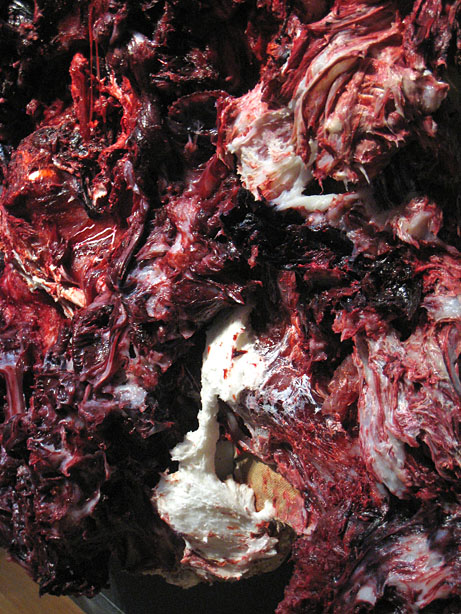 Unusual sights in the Gallery of Honour, the most exclusive museum room in the Rijksmuseum in Amsterdam. Since 27 November 2015, three large works of art by the British-Indian artist Anish Kapoor disrupt the harmony of masterful 17th century paintings that populate the long hall in the heart of the Rijksmuseum, normally reserved for great Dutch masters like Vermeer, Rembrandt, Frans Hals and companions.

With Internal Object in Three Parts, Anish Kapoor created works of art that look like slaughtered animals (or worse), made of silicone that was applied on rough fabric. Dark red tones and brownish colours combined with some whites give them the appearance of fresh meat that has just been skinned. A shocking contrast to the often smooth surfaces of the old masters on display here, who masterly managed to paint the objects in their scenes in lifelike, almost photographic realism. Marsyas is one of the mythological figures that is said to have inspired Anish Kapoor for these artworks. Marsyas had lost a musical challenge against Apollo, ancient Greek god of music, and as his punishment, was skinned alive.

Are they paintings? Sculptures? Reliefs? Judge yourself. The Rijksmuseum curators put Anish Kapoor's works in direct relation to Rembrandt, especially his late oeuvre when he repeatedly applied his paint in thick layers, modelling three-dimensional surfaces rather than painting them, like in the sleeve of the man shown in the so called Jewish Bride. This painting, hanging in the 'chapel' opposite Kapoor's works, is one of the Rembrandt paintings in direct dialogue with his Internal Object in Three Parts.

Anish Kapoor was born in Bombay in 1954 and lives in London. He is famous for his monumental sculpture that has found its way into renowned museums worldwide. We know him for example for his design of the ArcelorMittal Orbit for the 2012 Olympic games in London and, more recently, for the work Dirty Corner in the gardens of Versailles, that was vandalized with anti-Semitic slogans.

We could consider it an act of heresy, displaying repulsive creations like these look-alikes of lumps of fresh meat in the Rijksmuseum's most 'sacred' hall, out of all choices. As if the Gallery of Honour had turned into a slaughterhouse. Passing by these works and being surprised (to say the least) is unavoidable in any tour along the museum's highlights. But their contrasting with the old masters as well as the close artistic relationship of the coarse application of paint and the rough surface structure with some of them, both offer enrichments. With this juxtaposition, the visitors' thinking and experiencing in a museum is really being challenged - hardly an effect that should be unwanted in an art museum.

On display in the Rijksmuseum Amsterdam until 6 March 2016.