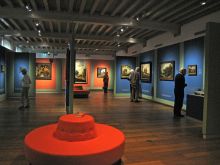 Mary and Joseph on their way to Bethlehem for the census. Martha and Mary with Jesus in a Dutch kitchen. Tobit half asleep next to a 17th century building between a yoke, brass ware and cabbage. Healthy Dutch cows in biblical sceneries. The rich man and poor Lazarus as background decoration for a still life made of oysters that probably came from the North Sea, and sweets from an Antwerp pastry chef.

Artists in the Netherlands of the 16th and 17th century apparently were fond of locating biblical stories in contemporary surroundings, closer to home than the Holy Land. This way, they must have thought back then in the Low countries, the subject became more identifiable and the owner of a painting much easier could compare his own actions and everyday life to the great examples of the Holy Bible.

Putting a biblical story in a contemporary scenery, this trick was applied by quite some painters in this period. The Museum Catharijneconvent in Utrecht now dedicates an interesting exhibition to this, organised in collaboration with the Dutch Biblical Society (Nederlands Bijbelgenootschap) and showing some wonderful loans as well as paintings from its own collection. 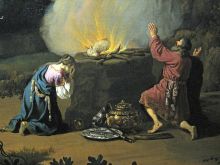 The exhibition not only shows how artists translated stories around biblical examples into their own realm. You can also discover plenty of Bible stories that turn out to be unknown to (or long forgotten by) many of us. Or do you remember why exactly Manoah and his wife, the parents of Samson, offered their sacrifice to God, or in which bizarre way Tobit became blind?

The exhibition At home in the Bible (Thuis in de Bijbel) visualises how painters in the 16th and 17th century made their public familiar with Biblical tales in contemporary ways. Among others with works by Jan Brueghel (the Elder and the Younger), Pieter Brueghel II, Jan Steen, Jan Baptist Weenix, Osias Beert, Frans Post, Nicolaes Pickenoy and many more.

On view in Museum Catharijneconvent in Utrecht until 10th of Augustus 2014.