You can get the best panoramic view of Utrecht from one of the least beautiful building complexes. Many think the cathedral tower to be the ideal place for the best view on the city. However, from here you have the disadvantage that you can't see Utrecht's most prominent sight itself when you are standing right on top of it. 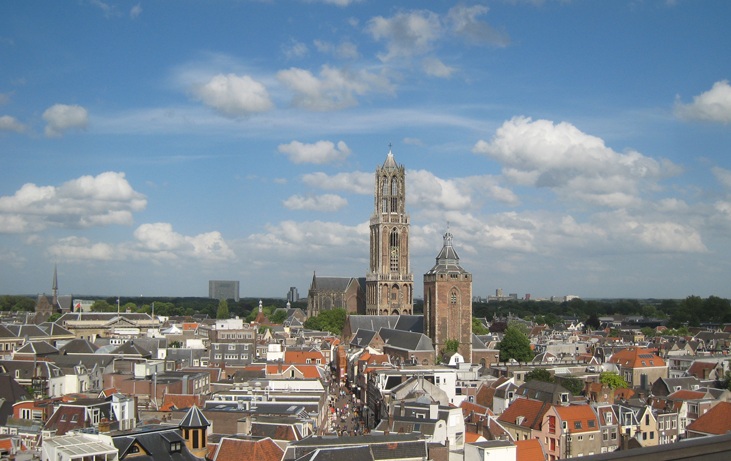 For the most beautiful panorama of the city, go to the East side of the shopping mall Hoog Catharijne, located between the main train station (Utrecht Centraal Station) and the historic centre of Utrecht. Before these structures were built here, this was the area of the Western city limits with the city gate Catharijnepoort and the detested Vredenburg castle from where the former Spanish rulers tried to control the city and its surroundings. From 1963 onwards, a huge shopping centre was erected here. For its construction, several houses dating back to the Middle Ages had to bite the dust and were demolished, among them  also the well-known Art Nouveau building of the insurance company De Utrecht. Currently (2013) the whole area around Hoog Catharijne is under (re)construction.

Walking from the central hall of the main train station towards the city centre, you will find the entrance to a department store at the end of the shopping mall at your right-hand side, just before you reach the moving stairway. This department store operates a self-service café on its top floor. And within the café, stairs lead to a roof terrace for guests. From here now it is that you can enjoy the best view of Utrecht. Politeness recommends that you get yourself a beverage or some other consumption in this self-service café, after all it's not a public institution. And let's be honest, having a cup of coffee in your hands might just add that extra little something to enjoying the great view. At least when the weather plays along and of course during opening hours.

The journey through one of Utrecht's most commercial passages is rewarded with a view upon the city that is dominated by the cathedral tower as main eyecatcher standing upright in the middle. The afternoon is the best time to come here because then the sun is in your back and shines directly on this highest church tower in the Netherlands, measuring 112 meters. That is, if it shines, of course.

In front of the cathedral, you can see the smaller, more compact tower of the Buurkerk, formerly one of the most important parish churches of Utrecht. Today it houses a museum of self-playing musical instruments and music boxes (Museum Speelklok). When you bring binoculars, or when you are sharp-eyed, you might detect the cannon balls in the wall of the tower, dating from when the city came under fire from Vredenburg castle. The cannon balls were bricked in again in the left side of the church tower, about as high as the upper end of the left aisle. The street that you can see leading towards the Buurkerk, is the Steenweg. Today it is a poplar shopping street and originally it was one of the first streets built in the Middle Ages.

A little to the left of these churches a triangular pediment of a yellow sandstone building projects a bit over the other roofs: the city hall. Today's neoclassical building was erected here from 1826 onwards, on the spot where before the houses called Lichtenberg and Hasenberg gave home to the town hall. The classical tympanum, the triangular shape in the centre, was adorned with sculptures by the hand of Pieter d'Hont in 1957. Pieter d'Hont was a well-known Utrecht sculptor of the 20th century and you can come across his work all over the city. One of his most famous sculptures is the figure of Anne Frank in front of the Janskerk (St. John's church). His studio at Manenborgh bastion at the South end of the city centre can only be suspected but not seen from our platform here.

Directly to the left of the city hall a dark neogothic brick building is visible, with a high, slim little tower poking out. This is the Saint Willibrord church, named after Willibrord who in the 8th century AD missionised Utrecht so the people inhabiting the area became Christians. The church was built 1875-1891 according to a plan by architect Alfred Tepe, at a time when it was allowed to Catholics again to have their own houses of prayer. Before that, for a long time they had to gather in more or less secret places, so called clandestine churches (schuilkerken), because in the republic of the Netherlands, officially no other confession than the Protestant belief was allowed. In Utrecht, by the way, some of these clandestine churches have been more or less preserved and are just about visible from up here. As for the Willibrord church, there were even two secret predecessors, first a clandestine church in the little alley called Dorstige Hartsteeg, opposite the Museum Catharijneconvent, later the so called Silokerk (Silochurch) in the Herenstraat. 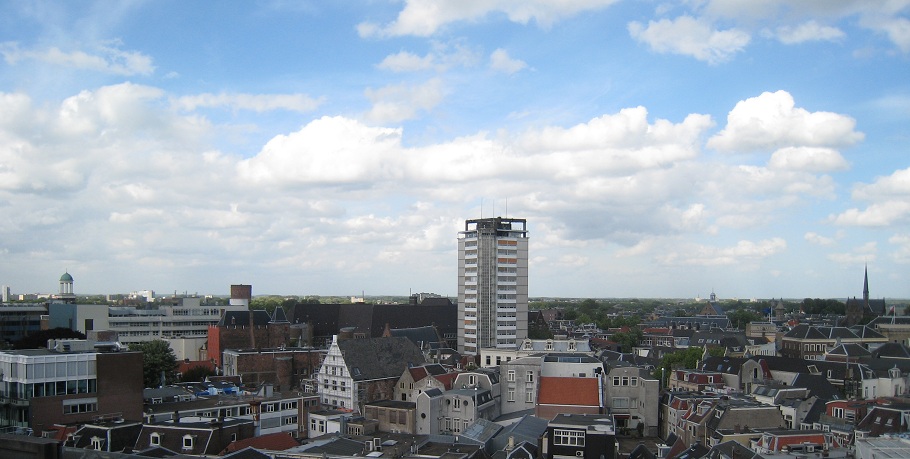 Further to the left you have the opportunity to disgust an office tower of dubious beauty. This so called Neudeflat (because it is located at the Neude place) was built in 1961 and ever since has provoked claims to demolish the building, also buy local citizens. The building's architect Huig Maaskant mainly was active in Rotterdam when this town needed to be built up again after its ruination during the Second World War. It was there that he had built the now 185 meters high Euromast tower in the year before, a famous landmark of Rotterdam. To strive for heights originally also was the plan for the Neudeflat, it was supposed to be higher than the cathedral tower. But this plan was abandoned after heavy protests of the local community. A special characteristic of this building is its foundation. It is not erected on a foundation of poles driven into the ground like the neighbouring buildings and as it is common practice in the Netherlands. Such a pillar foundation would have presented a danger to statics for the houses surrounding it, so this office tower was erected on a platform of concrete as its foundation.

To the left, built from brick, there is a different kind of modern cathedral, the Postkantoor, the Utrecht's former main post office. Since October 28th, 2011, it does not serve as a post office anymore and so unfortunately the awe-inspiring central hall cannot be admired anymore. The post office was built 1920-1924 by architect Joseph Couwel and is an impressive example of architecture of the Amsterdam School (Amsterdamse School). The large hall built of yellow bricks is furnished with monumental sculptures by Hendrik van den Eijnde made from bluestone, a blueish limestone and representing the five continents. In the Middle Ages, a monastery was located at this spot, the monastery of Saint Cecilia (St.-Caeciliaklooster) that had to be closed after the reformation. Afterwards the mint was installed here which in 1814 was promoted from a provincial to the Royal Dutch Mint.

In front of the post office building, you can see the town castle Oudaen, a castle that wealthy patricians of Utrecht had built for themselves in the Middle Ages. You can spot it on the left next to the building with the white wall and scaffolding. Oudaen castle was built shortly after 1276 and is named after the family Oudaen who came into possession of the castle from 1395 onwards and who also were the proud owners of another castle called Oudaen, situated in Breukelen along the beautiful river Vecht. Also here in the backside of the city castle, cannon balls were bricked in that originate from attacks from Vredenburg castle in 1576-77. In 1758 Oudaen was changed into a home for the elderly. At the main canal, the Oudegracht, you can still see a sculpted relief referring to this purpose. Today castle Oudaen houses a restaurant.

We have to admit, what you cannot see from up here for example is one of Utrecht's main attractions, the Oudegracht, the old canal, the main artery of the lively centre of Utrecht. It was the main way of transportation for the town in the Middle Ages, with the adjoining cellars that today are welcome locations for restaurants and artists' studio's. In order to experience Utrecht, the view from up here is not enough. So go and get into the centre and see for yourself. A nice way to do that, is of course with a guided tour through the city of Utrecht.

By the way: Has anyone of you tried and visited this terrace for the panoramic view? Maybe even based upon this article? Feedback and experiences are welcome.

PS (2016): Unfortunately, the department store with the roof terrace has experienced serious financial difficulties and was closed meanwhile. So we can not enjoy this panoramic view of Utrecht at the moment. But we hope this will change soon and the building and its roof will be accessible again in the future.